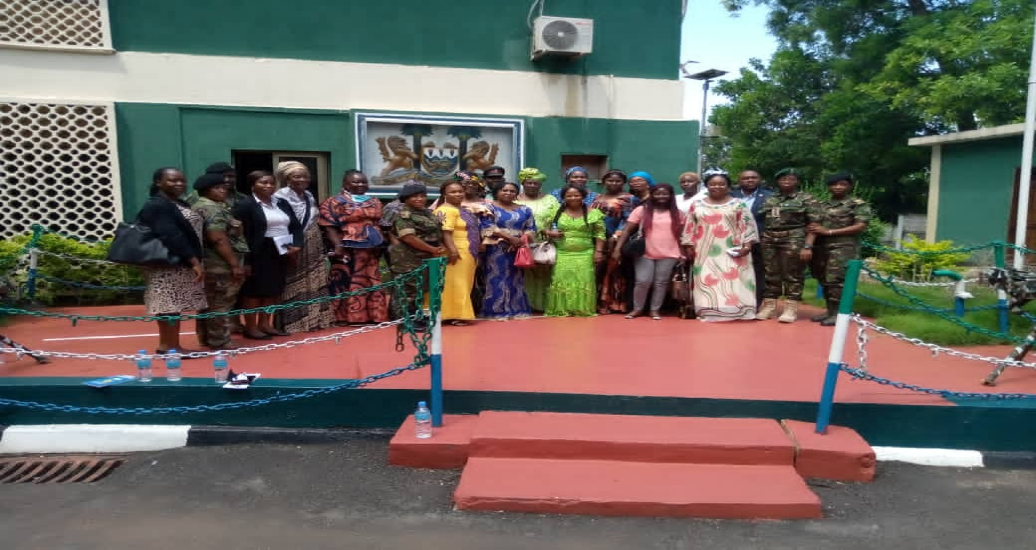 SLENA, 3rd November, 2021, The Parliamentary Female Caucus, chaired by Hon. Veronica K. Sesay has over the weekend concluded a three-day oversight aimed at assessing and promoting gender mainstreaming in the police and military forces in the country.
The oversight is largely dependent on the theme: monitoring the implementation of Sierra Leone 2019 action plan 2 relating to resolution 1325 and 1820 on women, peace, and security.
Col. Mohamed S. Fofanah, Director of Gender welcomed female MPs at Defence Headquarters and spoke about the establishment of the Gender Directorate of the military in 2019. He also said that there was massive recruitment of female officers, whose current strength in RSLAF stands at 12%, and close to 28% in peacekeeping mission.
However, he said gender mainstreaming remains a challenge at the military due to discriminatory promotion, capacity building and a lot of female officers have given birth. He said that female officers are not part of decision making and lack of funds was affecting the promotion of gender mainstreaming in the military.
Speaking on the resolution regarding women, peace and security, Hon. Veronica K. Sesay said they would continue to advocate for women’s representation and inclusion to the military be increased and that they would also ensure that issues relating to women, peace and security were localized in cities and districts across the country.
Speaking on the need for separate gender budget in MDAs, she encouraged female officers to be steadfast amidst the challenges and described women as multipliers and developers of a country. She promised that, the challenges would be looked into with a view to addressing them.
Similar visit was done at police headquarters, where the female caucus addressed high ranking police officers including the IG and other officers on women, peace and security.
Inspector General of Police, Ambrose Sovulla thanked the visitation of the female MPs and briefed them on efforts geared toward enhancing gender mainstreaming in the police. He bluffed that the Sierra Leone Police was highly considering and promoting female participation into positions of trust.
The Female Caucus also visited Bo District and City Councils, Bo Police Station and Gondama Barracks where they had similar engagements with female officers and staff regarding a UN resolution on women, peace and security.