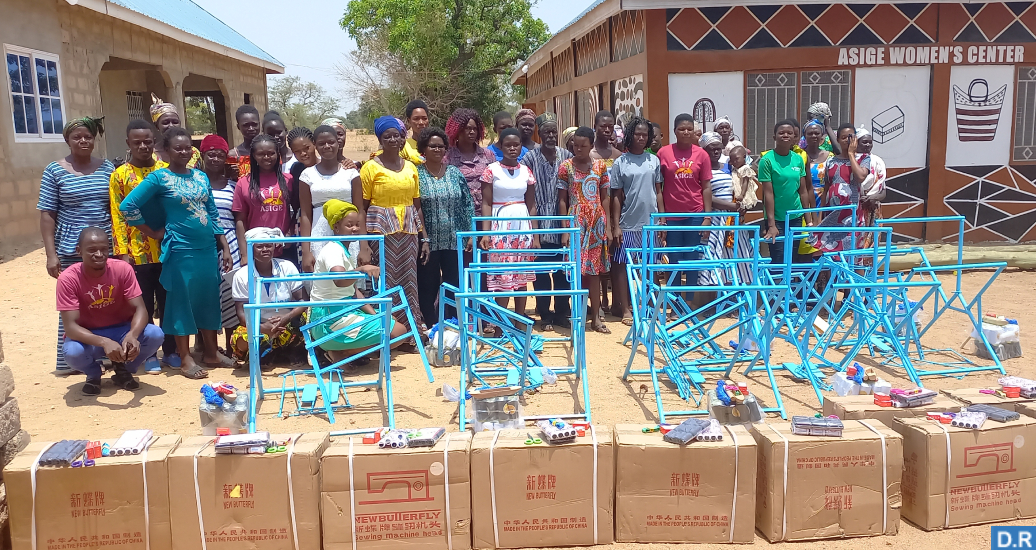 By s.alarkoubi12 April 2022No Comments

Sumbrungu (U/E), April 11, GNA–The Advocacy for Social Inclusion and Girls Education (ASIGE), a non-governmental organisation, has supported 20 girls in the Upper East Region to learn vocational skills, as part of an empowerment project.
The gesture was also to help reduce unemployment among teenage mothers and out-of-school girls.

With funding from the American Serving Abroad Project, a United States based organisation, dressmaking (sewing) and smock weaving machines, uniforms, books and other learning materials were provided for the beneficiaries.

The full cost of the training covering a period of three years have also been paid.

One of the teenage mothers who dropped out of school when she got pregnant while in Junior High School, opted to return to the formal school system and was supported with learning materials including textbooks for all subjects, note and exercise books, pens, uniforms, footwear among others.

Ms Dorcas Apoore, the Executive Director, ASIGE, speaking with the Ghana News Agency at a presentation ceremony in Sumbrungu, Upper East Region, said the beneficiaries were selected from six communities in the Bongo District and Bolgatanga Municipality, where ASIGE had been supporting women to weave and sell straw baskets in both national and international markets.

According to Ms Apoore, six and 24 girls were enrolled onto vocational training in 2020 and 2021 respectively and the aim was to contribute to providing them with meaningful economic skills to prevent rural urban migration and reduce poverty.

She said unemployment and poverty had pushed many young girls into getting pregnant, forced marriages and dropping out of school, and the support would empower the beneficiaries to be gainfully employed and help employ their colleagues.

It would also enable the young girls who are unable to obtain formal education to be self-reliant and help contribute to achieving the Sustainable Development Goals.

Established in 2014, ASIGE has carried several economic empowerment activities aimed at addressing challenges confronting the growth and development of women and girls in the Upper East Region.

Apart from undertaking sensitization programmes on sexual and reproductive health education and presenting over 2,000 sanitary pads to schools in the Upper East and Upper West Regions, another 429 women were being empowered to weave internationally demanding straw baskets for a living.

The Executive Director said the baskets were being exported to Australia, Japan, France, Turkey, Netherlands, the United Kingdom and United States of America, and that had empowered the women economically and contributed to reduce poverty and migration to Southern part of the country.

“These are daughters of our weavers that we have been supporting who are unable to acquire formal education due to teenage pregnancy, to help them collectively create a positive impact in the communities in which they live,” she added.

Madam Rita Abamah, the Bongo District Girl-Child Officer, Ghana Education Service, said teenage pregnancy was one of the biggest challenges facing adolescents, especially girls in the region and advised parents to support their teenage girls who got pregnant and dropped out of school to learn a trade.

This, she said, would enable them make up for missing out on achieving their dreams in the formal learning system.
Madam Rose Akuribire, Leader of the Women Basket Weaving group, expressed gratitude to ASIGE and its partners for the support over the years.